Stefanie Lewallen with The Write Talk loves to do just that.. Write and Talk! When she is not writing she is no doubt speaking. Stefanie offers over 26+ years of professional writing services including voiceovers, commercial writing, radio, feature writing, ghost writing, PR, marketing and fundraising.  Her speaking engagements include women's groups, youth groups, speaking to writer's groups on "Writing as a Ministry", how to get started, how to edit your own work, and incorporating humor and real life to your stories.   Her articles have been seen locally and internationally in The Commercial Appeal, Delivered Magazine, The Tri-State Defender, Bartlett Express, Memphis Business Journal, and many more. If you are interested in booking Stefanie for your next event or would like to inquire about services please email Stefanie at stefielew@yahoo.com.

By clicking the samples below it will take you straight to the articles. 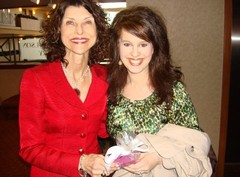 Pam Tebow and Stefanie Lewallen at a Benefit

Pam Tebow is the mother of mission-minded quarterback Tim Tebow of the Florida Gators and 2007 Heisman Trophy Award winner. She recently spoke at the Founder’s Day Luncheon for the Salvation Army at the Holiday Inn at the University of Memphis. She brought with her the message of influencing others and how we are all created for good works.

“We all come from different backgrounds, but we all want to lead a life of influence,” said Tebow. “We think we have to have an impressive resume, but we don’t.  You have an influence on anyone your life impacts.”
She points out that we as Christians have to be careful. People are always watching us and what we do. Tebow says the best way to influence people is to let them see you trust God.  “When they see you trust God, they will too,” said Tebow. “Trust God in the small things. Then the muscles of faith will grow.”
Tebow was thrust in the spotlight through her story about her pregnancy with her son, Tim. She was in the Philippines with her husband, Bob, when she was told to abort her baby. The doctor claimed that he only saw a massive blob of tissue and a tumor.  She chose to trust God and continue her pregnancy without being able to receive any medical care.  When Tim was born, the doctor proclaimed him a miracle baby because the placenta was only hanging on by a thread.
Because of one reporter who captured this story on video and shared it at the Heisman Trophy Awards in 2007, Tebow feels that she has now been called on a new mission. She said she has embraced the calls to come and speak all over the country and to get more involved with the pro-life movement.

Tebow also stresses how important it is to read the Bible and pray. “It is the Word of God. He gave it to us as a grid to filter out the error and truth,” said Tebow.  “Prayer is how God influences us, the people we pray for, and situations.” She believes that prayer and the outcry of supporters ensured that their now famous “controversial” pro-life commercial would be aired during this past Superbowl.  Even though the commercial was much more vague in meaning by the time CBS edited and approved it, according to the latest Barna pole, 5.5 million people said they have changed their mind about abortion.

Passion should also play a big role as believers, said Tebow. “If you are not passionate, no one else will believe in it. Passion influences other people.”  Although the Gators lost the national championship game to Alabama, 93 million people googled the verse John 3:16 that Tim wore on his eyepatches after the game.

More than anything, Tebow is proud that her son is using football as a platform for Christ. Her son is still sticking around and staying involved with Campus Crusade on his college campus and continues to speak up for Christ. He wants to be remembered as a follower of Christ and not just a football player.  While pastors can go to prisons to witness, yet be completely ignored, Tim is able to walk in and grab their full attention because of who he is. “We didn’t ask for a quarterback,” Tebow laughed. “God just threw that in.”

“Our influence begins when we meet Jesus Christ as our Savior,” said Tebow. “Everything begins from there. We get that miraculous power source from God and in the end, God gets all the glory.”
If you are interested in more about the Tebows, check out the Bob Tebow Evangelistic Association at www.btea.org.